Every Monday we will be looking at a short extract from a text and analysing what and how the writer has written. Feel free to add your own comments!

I blame the T-shirts. The casual wear favoured by those founding wunderkinds of tech – Mark Zuckerberg, Steve Jobs, Sergey Brin, Larry Page and the rest – lulled us into a false sense of security. Even after they’d begun making serious money, too many of us took the aversion to a collar and tie to mean the likes of Facebook or Google were not really scary capitalist behemoths, but retained the spirit of the upstart startup: quirky, plucky and driven chiefly by a desire to do cool stuff with computers. They certainly saw themselves that way, Google charmingly distilling its mission statement into three words: “Don’t be evil.” It’s amazing how long an initial image of laidback informality can endure: for decades, Britons struggled to see Virgin as a corporate giant because Richard Branson had long hair and a goatee.

– Short sentence to open and draw in reader. Creates a slightly humourous tone but also sumarise the point being made

– Emphasises point that we were decieved into believeing them (Word choice)

– Contrast – showing the difference is what they are and what we think they are.

– Rule of three (after colon) – to emphasise what the spirit of a start up is, this also builds up the contast with the big “capitalist behemoths”

-Sentence Structure – colon shows that the writer is expanding on the point being made, giving an example which we all know and understand and shows that this is not a new problem.

Every Monday we will be looking at a short extract from a text and analysing what and how the writer has written it.

Feel free to add your own analysis in the comments!

“As a kid, I used to think that Foreign Correspondents were the most exciting of people. They were professional seekers of chaos, rushing to the scene of any global disaster, willingly hurling themselves into the fire. It’s what I always wanted to be.”

– Use of contrast to show how unusual these Foreign Correspondents are – they do a job in an area which is in meltdown, and they have to appear to be calm and efficient. Seekers also implies that they hunt for this chaos – that it is a conscious choice.

– Two words, action words, that builds from that idea of them being “Seekers” It shows the speed at which they work and also implies how they choose this life. It also adds to the idea that this is an exciting job.

– Two phrases which highlight the danger of what they are doing

– “Willingly” – builds on the idea of “Seekers” this is something they choose to do. Showing their adventerours, thrill-seeking side

– Simple sentence at the end of the quote and yet it reveals a lot about Dom Joly’s character. It is an effective end to this paragraph.

Every Monday we will be looking at a short extract from a text and analysing what and how the writer has written.

Feel free to add your own comments/analysis below!

Thus, every weekday morning, scores of idling cars line up behind dozens of buses disgorging waves of kids. Amidst this, Janette and Adam—each of whom was about 5 feet tall—seemed like a pair of diminutive daredevils wading into a tsunami.

– Use of the word “every” which emphasises that it happens all the time.

– Love the metaphor of these intrepid children managing their way through the chaos (tsunami) – again layering up your understanding through use of word choice. The clever use of diminutive reveals just how brave these children are to push their way through

Every Monday we will be looking at a short extract from a text and analysing what and how the writer has written.

Feel free to add your own comments/analysis below! 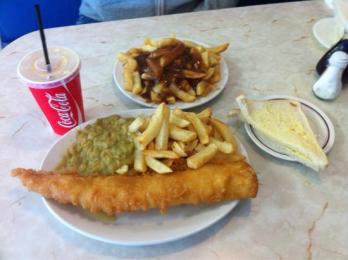 This is a short quote that is (unfairly) cruel about eating in Blackpool!

“Just sniffing the air in Blackpool can harden the arteries. Every day prime ingredients arrive here and, before they can even pause to gulp the bracing air, are dumped in the deep fat fryer.”

– The use of the word “prime” suggests that these are the best ingredients, that should be tasty and healthy but are not in Blackpool

– Use of personification – ties in with the first image – “just sniffing the air” – and also creates a humourous, flippant tone

– “dumped” – word choice – shows the lack of care and ceremony taken with food in Blackpool, is in contrast to the description of the ingredients as “prime.”

Each Monday we will be looking at a short extract from a text and analysing what and how the writer has written. Feel free to add your own comments/analysis below!

“Lucille was on an Autobahn – no turnings off, no roundabouts, no dead ends or traffic lights stuck on amber, no wrong ways or surprises. Whereas I was somewhere in the middle of page 64 in the A-Z, and I was holding it upside down. Deliberately.“

– In this extract the writer describes two very different girls by comparing them to two different ways of travelling. Lucille is someone who is very organised and planned – knows exactly what is coming up ahead and is going exacrly where she wants to, wheras the narrator isn’t!

– Use of the dash lets the writer to expand on the point she is making about Lucille. By listening all the things that the Autobahn isn’t it builds a picture up in the reader’s mind about what exacrly the writer means, which she then sums up at the end of the list. This helps to establish in the reader’s mind exactly what Lucille is like.

– The contrasting image for the narrator is of a jumble – the middle of a map with all the interconnecting roads and images. She then expands on this to say that she is holding upside down, meaning it makes even less sense. This is someone who is not organised, nor knows where she is going.

– The short sentence emphasises the word “Deliberately” and reveals a lot about the character – being disorganised and lost is not a mistake or a character flaw, this is something she chooses to be and something she enjoys being.

Candy Guard is a writer and animator, her website is: http://candyguard.co.uk/